About Our Custom Rail Car

Following a three-year, $100,000 mechanical overhaul,Tioga pass is certified to move over almost any railroad in the United States, Canada or Mexico. The car meets all Amtrak and Via Rail Canada specifications for passegener cars, and
can move in almost any train to any destination.

Tioga Pass is fully self-contained. Its diesel generator supplies power when not moving, and an axle-driven generator powers the car when riding the high iron. Full heating and cooling systems keep you comfortable, no matter the weather.

With a full stainless steel galley, complete with side-by-side refrigerator and propane range, Tioga Pass has the right equipment to feed hungry travelers. Our skilled chefs can prepare gourmet menus to suit any taste. The fully equipped dining room seats eight for elegant meals as the scenery rolls by outside the windows.

The large living room and full dining room are complemented by two master bedrooms with a bathroom and shower en suite, one single bedroom, and one crew room. Up to twenty people can be accomodated for day trips and night accomodations are available for seven.

The open platform at the rear of the car allows unparalleled views of the scenery along the way. Tioga Pass is available for charter to numerous destinations across North America. Smaller groups can travel on any of the public trips offered throughout the year. When travelling on a private railcar, the destination is only half the fun! 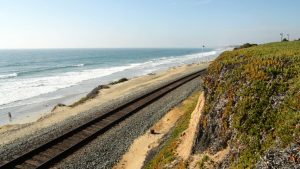 Our History
Built in 1959 by the Canadian National Shops in Point St. Charles, Quebec, Tioga Pass was one of a series of 12 similar business cars designed for railroad executives. Originally number 26, and later renumbered 93, Tioga Pass spent most of its life in Edmonton Alberta. There it served the Vice-President of the Mountain Region.

The Canadian National made several modifications to the original design over the years. One of the three master bedrooms originally built into the car was removed in 1979 to increase space in the livingroom. Because the car sometimes moved on the rear of freight trains, a diesel generator and rectifier were installed on the car. After the inception of VIA Rail, steamheated trains became rarer, necessitating the installation of a self-contained heating system in 1993, just before the car was sold.

Car 93, now named Tioga Pass was purchased by Mr. Rutherford P. Hayes, a wealthy local businessman in Barstow, California, in late 1992 because, as he put it, “I always just wanted one.” In an epic journey, Tioga Pass made the trip to Barstow, California in January 1993. Unfortunately, soon after its arrival in Barstow, Mr Hayes passed away. The car sat, forlorn and abandoned, in front of the old Harvey House in Barstow.

Aronco Leasing purchased the car in 1997 from the Hayes estate. A victim of benign neglect, numerous repairs and upgrades were needed
before the car could be used again. Vandals had also taken their toll. Most of the windows were broken, and several interior fixtures had been stolen. At times, transients broke into the car and even slept inside.

Beginning in 2002, Tioga Pass underwent the most extensive restoration since its construction. The wheels, suspension, couplers, braking system and other parts of the car were all disassembled, inspected and then put back together. Numerous parts were in need of repair or replacement. Because many parts are no longer made, finding replacements was no easy task and often took months. In ddition, new electrical systems required by Amtrak were installed, enabling the car to operate in anywhere on almost any passenger train.

Learn more about this great trip

• Take in the breathtaking California coastline for miles as you enjoy superior service aboard Tioga Pass. This all-day trip is proof that the destination is only half the fun.
• Spend the day exploring San Diego. Enjoy breakfast aboard Tioga Pass as we leave Los Angeles for the short trip to San Diego. Dinner is served on the return trip in the evening.
• See the Sierra Nevada Mountains by train. Whether covered by snow or on a beautiful summer day, the scenery is sure to please.